The metre [French spelling], or meter [English spelling] (symbol: m) is the SI base unit of length. It is defined as the length of the path travelled by light in absolute vacuum during a time interval of 1/299,792,458 of a second.

1 metre is equivalent to:

The word itself is from the Greek metron (μετρον), "a measure" via the French mètre. Its first recorded usage in English is from 1797.

In the eighteenth century, there were two favoured approaches to the definition of the standard unit of length. One suggested defining the metre as the length of a pendulum with a half-period of one second. The other suggested defining the metre as one ten-millionth of the length of the earth's meridian along a quadrant (one-fourth the polar circumference of the earth). In 1791, the French Academy of Sciences selected the meridional definition over the pendular definition because of the slight variation of the force of gravity over the surface of the earth, which affects the period of a pendulum. In 1793, France adopted the metre, with this definition, as its official unit of length. Although it was later determined that the first prototype metre bar was short by a fifth of a millimetre due to miscalculation of the flattening of the earth, this length became the standard. So, the circumference of the Earth through the poles is approximately forty million metres. 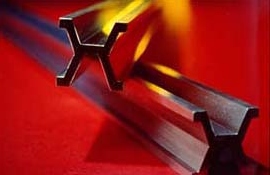 International Prototype Metre standard bar made of platinum-iridium. This was the standard until 1960, when the new SI system used a krypton-spectrum measurement as the base. In 1983 the current metre was defined by a relationship to the speed of light in a vacuum.

In the 1870s and in light of modern precision, a series of international conferences were held to devise new metric standards. The Metre Convention (Convention du Mètre) of 1875 mandated the establishment of a permanent International Bureau of Weights and Measures (BIPM: Bureau International des Poids et Mesures) to be located in Sèvres, France. This new organisation would preserve the new prototype metre and kilogram when constructed, distribute national metric prototypes, and would maintain comparisons between them and non-metric measurement standards. This organisation created a new prototype bar in 1889 at the first General Conference on Weights and Measures (CGPM: Conférence Générale des Poids et Mesures), establishing the International Prototype Metre as the distance between two lines on a standard bar of an alloy of ninety percent platinum and ten percent iridium, measured at the melting point of ice.

In 1893, the standard metre was first measured with an interferometer by Albert A. Michelson, the inventor of the device and an advocate of using some particular wavelength of light as a standard of distance. By 1925, interferometry was in regular use at the BIPM. However, the International Prototype Metre remained the standard until 1960, when the eleventh CGPM defined the metre in the new SI system as equal to 1,650,763.73 wavelengths of the orange-red emission line in the electromagnetic spectrum of the krypton-86 atom in a vacuum. The original international prototype of the metre is still kept at the BIPM under the conditions specified in 1889.

To further reduce uncertainty, the seventeenth CGPM of 1983 replaced the definition of the metre with its current definition, thus fixing the length of the metre in terms of time and the speed of light:

The metre is the length of the path travelled by light in vacuum during a time interval of 1/299 792 458 of a second.

This article is available under the terms of the GNU Free Documentation License. Original article can be found here.

It may come in handy.

Was this site helpful?

Link to Us | Donate